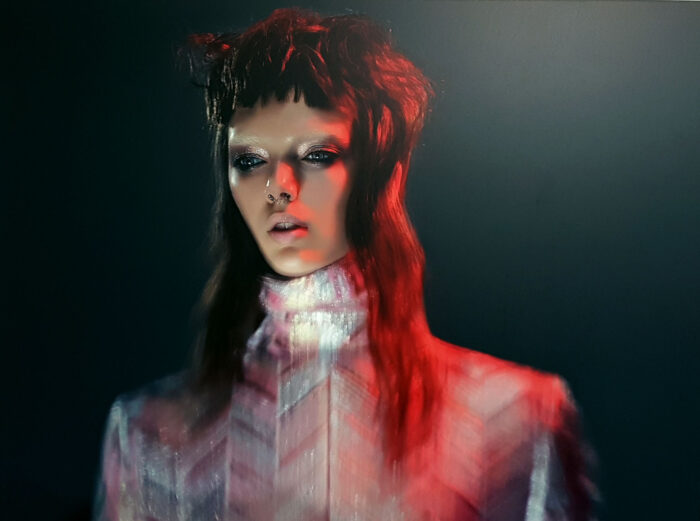 Aside from the electronic DJ sets or Live Acts, the ingredients of the formula of happiness for the club night experience are the architecture of the club, the sound of the club and the clubbers of the club. In this regard, the respective fashion style of the dancers reflects more or less the dress code of the club. Thus, a conceptualizing selection of the guests and a skillful eye of the bouncer in terms of the so-called style police allows for the decision whether authenticity and the future club style will enter the club or will ignorantly be sent back home by mistake. Of course, a club or party operator constantly wants to make sure that his target group of followers will be able to experience the scope for self-expression which is offered by means of the club image.

Belonging to a certain scene or standing for an ideology of living is usually characterized by means of distinguishing features and personal appearance. In view of the last thirty years of Berlin Techno culture, a complex evolution of Techno fashion is apparent which was influenced by individual club concepts, temporary stylistic currents and also the events of global politics. Last but not least, the fashion revivals of the 80s or presently the 90s have served as trendy catalysts for the style of the clubber.

Let’s review the different eras of Berlin Techno outfits and have a look at some of the most eye-catching stylings. The style of the first generation of Techno dancers and DJs was given distinction by the late 80s, thus it was a melange of New Wave, Punk, Poppers (a German youth culture style), Skinhead sportswear and also fetish styles. Labels like Daniel Poole, Stüssy and Pervert were elementary for the coolest club wear, aside from second hand Adidas.

As it was the case in England, a sporty form of XL clothes was also very much en vogue for the Berlin ravers. For example, the bucket hat, which is extremely popular again today, found its way into the Berlin Techno clubs – courtesy of the British soldiers stationed in Berlin back then. Over the years, the disciples of the specifically created discotheques for electronic dance music were also vested in their own unique club fashion developed for them, for example the legendary Frankfurt label Velvet Monkees.

But there were also different ways: At the same time as the new trends developed, DJ Tanith and his crew put versions of the camouflage look into dichotomy by placing the functional purpose of this army clothing for martial action in the contrary context of hedonistic freedom and tolerance. Techno clubs – respectively their predecessors – offered spaces of freedom where anybody could just be the way that he or she felt like.

Techno clubs – respectively their predecessors – offered spaces of freedom where anybody could just be the way that he or she felt like.

The free spirit of Techno was reflected in intricate costumes of science fiction & fantasy styles which in part were aligned with space travel imaginations. As it was the case with the comics from the 60s whose stylings were evoked by plotting the visions of the future, the new electronically engineered sound of the days to come was the driving impulse at the beginning of the 90s.

Sophisticated stylings which seemed to make dancing impossible due to their abstract and fragile apparition ultimately complemented the overall picture of a club night in a grooving union with perspiring bodies, oversize sports wear and shining leather and latex.

The gay scene of West Berlin around Nollendorfplatz with its martial leather dresses and dazzling transvestites in their exuberant transformations of beauty or trash forced a proper portion of tolerance and togetherness into the Techno style of the 90s. Also the hair styles were blatantly colourful or white-blond, some with varied dreadlock modes and some just in unisex with completely shaven heads.

Very early on, a party genre emerged from the Berlin Techno scene which, even to this very day, combines visual liberality with a respectful sexual companionship and the sound of Techno, effected through one of its most popular institutions, the KitKatClub, as well as other established Sex party venues like Pornceptual.

At the turn of the century, the styling of the Techno scene was shaped by the new genre of Electroclash, represented by acts as Fischerspooner and the record label by DJ Hell.

At the time, DJ Hell was more courageous than his DJ colleagues in the overall picture of music, DJ and fashion. The fashion styles and music by the initiator of the label International Deejay Gigolos had a strong impact on the mid-zeroes. In this way, he contributed substantially to the style of the clubbers who had found their second home in temporary Berlin clubs as WMF, Cookies, RIO or Casino.

Around the mid-zeroes, when Minimal Techno was establishing itself as another facet of Techno, the slimness of the dance floor pantaloon increased more and more – skinny jeans and the full beard found their way into the clubs, right before things quickly became casual. Designers of fashion extravaganza like Walter Van Beirendonck or John Galliano were influential as well.

With the opening of Berghain in the year 2007, Berlin Techno became a statement again all over the world. Under the attentive scan at the portal to nocturnal bliss, more and more emphasis was placed on letting the open-minded Berliners  appreciate club fashion as well as offering a home for celebrations free of worries. From all over the world, droves of Techno disciples came in whose stylistic characteristics did not match those of the typical Berlin Techno Head. As if they wanted to be on the safe side in order to be permitted into the club, their looks in front of the doors became increasingly homogeneous – and there were only variations of one shade of colour: black. This image was conveyed by various bloggers through a variety of online channels on a global scale, and thus a dark style was considered to be the key for admission at the gate.

With the boom of Berlin as the clandestine Metropolis of boundless celebration, the next age was dawning as well with new clubs and parties. About Blank openly maintains a distinct socially critical opinion firmly anchored in its concept. Clubs as Wilde Renate and Griessmühle or operators as Cocktail d’Amore are scoring with rampant Zeitgeist in all colours and sounds. They are all positioning themselves explicitly against the emerging political right-wing currents in society and the government.

Around 2018, a new generation moved to the threshold of the nightly experience at the Berlin Techno club: Young people whose parents belonged to the first generation of the Techno wave. You could say, the blood of the Techno beginnings flows through their veins. They find their inspiration mostly in fashion styles of the 90s and zeroes. Which nowadays date back twenty to thirty years.

The latest fashion designs by Damir Doma, Bernhard Willhelm or Maison Margiela combine clubwear details of the 90s with contemporary styles and materials. In addition, since March of this year, various types of protective masks and hygiene regulations against the spreading of the Corona virus are also exerting influence on the world of fashion. As a matter of fact, one of the most striking techno styles of the beginnings was wearing overalls, protective masks (even gas masks), luminary vests and gloves – inspired at the time by the contemplation of an existence in cyberspace.

Gloves and protective masks were a popular Techno style in the 90s. With the Corona pandemic, this look found its way into everyday life in the spring-time of 2020 – globally. Picture 2: Dancers in the E-Werk Berlin in 1995 | Picture by Tilman Brembs

Today’s approach is subordinate to the pandemic, therefore designs as the one by Production Club are the logical development of clothings with integrated protection against virus transmissions of any kind.

The LA label has developed an upper body suit which allows for the reliving of touch and nearness. Its vivid visual appearance picks up the wild colourations of the early Rave colours and coincides with the interests of the millennials, the fashion code of the hype-beast look. In this respect, Berlin offers a wide variety of fashion labels such as Studio 183 which can supply clubbers with the proper dress for the club night – for instance, DJ Dixons label Together We Dance Alone whose tops suggest futuristic messages, or DSTM with the classy workmanship of underwear in a formidable design, or the label Black Style with its extensive assortment of fetish clothings for the thrill of future Techno nights.

With the future reopening of the Berlin Techno clubs (hopefully all of them), new rave stylings will blend well with the traditional styles for dancing yourself away to the sounds of the night. Designs that evolved through protection against the Corona virus, stylings which arose in awareness of economic and sustainable slow fashion, plus clothings of functional, breathable texture – all this will be part of the mix. It will all find its place and match well with the dress codes of the fetish scene. The well-known simple black in front of the club door will then belong to the pre-Corona fashion and be in a stage of further development. Hopefully, a much more colourized rave look will soon make us all very happy.